Tony Melendez has over 30 years of professional training experience.

Tony had played baseball throughout New York before playing most of his competitive baseball in Puerto Rico. Tonys promising career was cut short after a career ending injury. He then returned back to New York and began his training career. Tony has trained and mentored hundreds of athletes and really enjoys coaching baseball and softball. Tony was the assisting coach and head conditioning trainer for the New York Hurricanes 15U national team and the Taconic Rangers 16U traveling team. In addition Tony was the baseball and training consultant for Eastern Nazarene College in Boston, Mass.

Tony has helped many young athletes achieve their dreams by assisting them from High School to College. Some of the young men who have been drafted under Coach Tonys leadership include Johnny Monell (S.F. Giants), Melvin Garcia (Toronto Blue Jays), Alibay Barkly (Angels) just to name a few. His easy, outgoing approach allows him to teach all ages of players and instill in them the confidence they need to succeed both on and off the field.

﻿Tony is currently a player scout for Clutch Sports Agency. 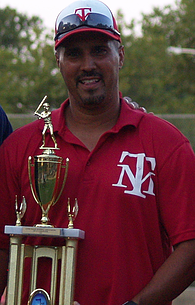 Anthony is a graduate of Iona Preparatory in New Rochelle, NY. He attended Iona College during his freshman year where he received a scholarship and played Varsity baseball for the Iona Gaels.

He would later get recruited by Eastern Nazarene College in Quincy MA where he played 2nd base for The ENC Lions.

Below is one of many articles which Anthony was featured in.

In 2008 Anthony was recruited to play collegiate baseball in Honolulu, HI Anthony Melendez drew the game-winning, bases-loaded walk for the Menehune in the bottom of the ninthand in 2009 he was recruited and played with the Atlantic City Green Waves where he also made the local papers..Anthony Melendez had a three-run home run and Jordan Morey had a solo home run for the Green Wave.

For the spring of 2011 Anthony will be Baruchs Bearcats 2nd baseman and is being scouted by various MLB teams.

​ Anthony is currently playing in Arizona for the Arizona Centennials. This will be his second season with the club and we are pretty sure his off season work out and preparation will show just what this Bronxite will bring to the club.